We live in an age where wisdom is only wisdom if it is supported by numbers.

There are two obvious problems with this. First, we miss a lot because we are looking for immediate return. And so it puts our focus on the wrong things. And secondly, as a result, we tend to assign value to things in terms of numbers. It is assumed that if it gives us the best numbers, it must be the best choice or behavior. Nevertheless, it is satisfying when the numbers do add up. 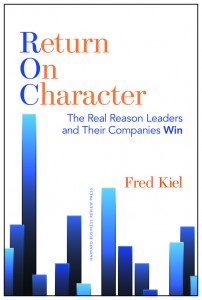 In Return on Character , Fred Kiel has put numbers to the notion that good leadership aimed at promoting the common good, not just individual, winner-take-all acquisition can be good business.

In a seven year study of 121 CEOs they found that highly principled CEOs—Virtuoso CEOs—achieved nearly five times the return on assets that leaders whose character scores were the lowest—Self-Focused CEOs—in the study. Also encouraging is the fact that people demonstrate character through habitual behaviors and therefore anyone can learn habits of good character an unlearn habits of poor character.

To assess character traits Kiel defined four keystone characters traits that supported that definition: integrity (telling the truth, acting consistently), responsibility (admitting mistakes, concern for common good), forgiveness (letting go of mistakes of others and ourselves, focusing on what’s right) and compassion (empathizing with and empowering others, caring for others, committed to others’ development).

Perhaps the most important fact revealed by these interviews was whether the leaders knew their life story. Could they provide a coherent narrative about their past, touching on a number of major events, both positive and negative, and including a reasonable description of the effect those events had on their personal development?

The Self-focused leaders seem to have had very little opportunity to construct a meaningful platform of beliefs or principles.

As a result, they lack the foundation of supportive relationships, character habits, self-awareness, and mental complexity upon which to build the kind of character-driven leadership that reliably contributes to sound decision making and strong, sustainable business results.

The good news is we can all improve our character—even Virtuoso leaders. Kiel outlines six steps in the personal change process. Step one is probably the most difficult and the key to the whole process.

Step 1: Acknowledge Invitations to Change. “Being confronted with an undeniable truth about the way others perceive our behavior and character is a gift.” And that usually doesn’t come in the form we would want it. (If there is such a way!) “No matter what their source, all invitations to change share one thing in common: they make you aware that your current understanding of the world is inadequate, that you have encountered the limits of your level of personal integration. Your existing worldview, your level of mental complexity, or your ability to act in a way that reflects your core values and principles is no longer working, and you have to find a new way forward.”

Step 2: Discover What You Want to Change. Understanding exactly what habit you need to change is not always apparent. It requires some self-examination and quite possibly some outside help for some additional feedback.

Step 3: Find the Fuel for Change. The resolve to make changes is made easier if you connect it to a visionary goal. “I want to be thought of as…” What result do you desire?

Step 4: Identify the Keystone Change. What change will contribute the most to your character development? Often a single new habit will bring about other positive character adjustments.

Step 5: Disarm Your Security System. Any change will make you uncomfortable. You have to be okay with that. Disarming your brain’s instinctive resistance to change “requires that you face the assumptions that rigger your unwanted responses and behaviors and the true outcomes they produce for you.” Create an action plan. “I will do this when…” This help you to avoid your automatic responses you are trying to change.

Step 6: Rewire Your Brain. As your new patterns of behavior seem secure, celebrate your progress.

It is not easy to become a Virtuoso leader in a world looking for loopholes. But Return on Character demonstrates that the payoff is there.

Virtuoso leaders can be made. To learn more about how to get started with the support to get you there, visit susansfreeman.com/services .