What are you making room for as a leader? 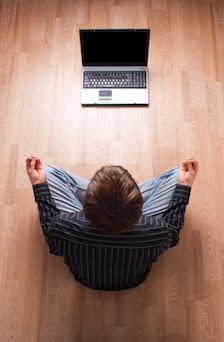 Steve, a CEO client, recently relayed a story that captures an important idea for leaders; the need to let go of certain beliefs, habits and approaches in order to create something different. He told me he and his wife were recently cleaning out their basement storage room.  There were piles of things in the center of the room surrounded by already-full bookshelves. There was stuff as far as they could see.

He had been practicing the skill of centering for a short minute or two each morning. This resulted in him becoming aware of developing an ability to quiet his active mind. You see like most leaders, he was bombarded every day by so much external stimuli. It’s difficult to not “react.” Reacting was something he was comfortable with; we all are.

Steve was less familiar with the ability to experience the present moment; this allowed him to be “responsive” rather than “reactive.” After a few sessions together, he became aware of how little he had experienced the present moment for much of his recent life. He inquired as to whether the familiar feeling of tightness in his body might be related to this. I responded that indeed, tightness and constriction are often a sign that we have been “reacting” a good deal; this shows up in the body as “holding on” and “holding in.”

As he looked around at the pile of mess in the basement, Steve recalled that centering helped him get into the present moment. When he was fully present, he discovered things weren’t always what they seemed before. He saw new approaches. He observed from a different perspective. The tightness in his body started to dissolve.

Steve chose to try centering in the basement clutter situation. Something remarkable happened. He observed that rather than becoming “frantic or revved up about the lack of space,” he tried a different approach. He centered himself, and created the experience of being an observer. From this perspective he decided that it would be best to clear a section of shelves first, before proceeding with any other de-cluttering. He saw that he could create “space” for those things they wanted to keep only after discarding that which they no longer needed.

How does “centering” apply to leadership?

It’s when we let go of the busy-ness, the mental models, and the habitual ways of doing things that we can clear space for the new. We can expand and open ourselves to possibilities. Most of the time what emerges leaves us in far better shape than that which we have let go of.

I have found that a good way to facilitate this process is through direct experience in the body; try out CABOR:

Many clients have shared with me the value of such a process for themselves. This opens the gateway to new capacities and the ability to expand into areas that were previously challenging.

Be willing to make room as a leader and see what fills in.

To learn more about how you can embrace and master this capacity, apply for a Breakthrough Your Barriers Discovery session.