What Do Young Women Leaders From Rwanda Have to Say About Leadership? 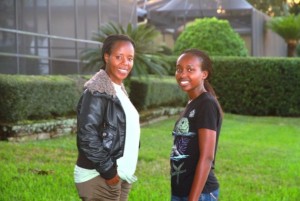 Last week I had the privilege of again hosting two students from the Akilah Institute for Women in Rwanda.  Akilah is an organization about which I am deeply passionate. It is a college for young women in East Africa that “offers a unique model of market-relevant education empowering graduates for success in careers and leadership roles.”  The first class graduated in August 2012 with a 100% job placement rate!

Two students are selected annually in a competitive process to represent the school during the 6-week intensive fundraising tour of 7 U.S. cities.  Cecile and Julian visited Tampa with Founder and CEO, Elizabeth Dearborn Davis, a Tampa native.

The Akilah diploma includes a leadership curriculum with topics including Foundations of Ethical Leadership, Community Leadership, Leadership in the Workplace, to name only a few.  The syllabus also covers Resiliency, Growth Mindset, Confidence and Character, Connection and Caring, Conflict Resolution, and Emotional Intelligence.  These young women are truly being prepared for leadership in their community, country and the continent of Africa.

I asked each of them to comment on what was most important to them as leaders.  Here are their thoughts:

Cecile believes that a leader must first focus on communication; that means being a good LISTENER.  For her, the most important leadership qualities are courage, focus, honesty, humility and empathy.

She believes that women make good leaders because they are often really good listeners.

Julian believes that leaders must first be flexible.  Julian admires leaders who are good at solving conflicts between people.  She encourages leaders to let people speak one at a time.  While listening, listen deeply, only then formulate your response.  She admires Nelson Mandela and Paul Kagame, President of Rwanda.  She sees President Kagame as being flexible and a good listener.  He goes to the villages and rural areas and speaks directly to the residents.  She states that he doesn’t want buffering; he wants to hear the truth himself as it comes directly from the people.

I also learned that community service is built into the Rwandan culture.

The last week of each month, between 8 a.m. and noon, all shops are closed.  No cars are allowed on the road.  Nothing can happen.  At this time every community cleans up its streets, roadways and environment.  Also, if you don’t leave your home and participate, the police can come to your home and grab you to do so! Rwanda has evidently taken a leadership role in environmental stewardship, becoming the first country in Africa to ban plastic bags.

I hope you will be as inspired by these young women entrepreneurial leaders as I have been.  Visit the Akilah Institute for Women’s website at to see videos, photos, and learn directly about how one young woman’s leadership vision is transforming a nation through education of women as leaders.