How Getting to the Root Can Transform Your Leadership and Influence 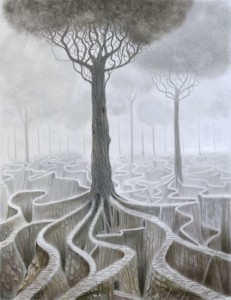 The theme for this month is how Leaders and Influencers can “Get to the Root.”  It got me thinking of all the ways we could explore the problem and solution.

How Healthcare Leadership can “Get to the Root”

To use the tree and forest analogy from last week, let’s take an example from healthcare leadership.  Imagine what happens when instead of seeing the body as a group of dissociated parts (the trees), your physician sees it as whole and integrative (the forest).  Just that mindset shift allows her to look differently at your “symptoms.”  She begins seeing connections, and through probing questions, she gets to the root.  By exploring the root of your symptoms and (not the symptoms themselves), the actions she can take are totally different.  She is now able to help the body do what it was designed to do; work as an inter-connected, supportive system to heal.

Getting to the Root with Organizations

The same is true in organizations.  How often have we seen organizational leaders change systems (focus on the trees) hoping to improve an aspect of their performance?  They focus so much on the trees that they ignore the context (the forest) that causes the problem in the first place.  When the tree fails to thrive, you don’t cut down the entire forest; you focus on what ails the tree, including looking deeply at what is BELOW ground (the roots), and not at what is just visible to the eye.

For example, consider an organization that implements large-scale re-structuring.  Often this is done without asking questions such as:   1) whether it has the right people in the organization 2) are people in the right roles 3) is the vision solid 4) has it been clearly communicated 5) is there a culture that permits trust and 6) if not why not?  Simply replacing one system with another doesn’t necessarily get to the root.  Without doing so, the original problem is likely to still be there, buried underneath the “change.”

Here is an illustration from a client who demonstrates the competency of getting to the root.   My client is the head of an organization with 200 employees. He was aware that an employee was performing well overall, yet he had more “mistakes” in his operations than others, (or at least that was the perception).   The leader told me that he was looking at the bigger picture (the forest) and then invited the employee to dig down to share his perspective on why he was perceived as making more mistakes than others (getting to the root).

The leader has been working to develop his capacities as a “coaching” leader.  He set up a time to have a coaching conversation with the employee.  He “asked” questions and listened skillfully.  He conducted the conversation within a context of genuine care and concern. My client looked for the root of the problem.  The employee was responsible for more volume than others at his level.  In addition, he was completing advanced education and was stretched thin.  He thought he would move on from the company in the future.

The leader applied powerful questioning to unveil the mindset and behavioral shifts that may need replacement instead of “reacting” in frustration and disappointment to the employee’s current challenge.   Finally the leader took the conversation to the level of the company’s broader vision and this individual’s role in its future growth and success (the forest).  Both parties walked away having understood the “root” of the problem, corrected the “mindset” that may have contributed to it.

Since the leader deemed this a successful conversation, he then reached out to additional staff.  His intention was to deeply listen to their individual cares and concerns. He then reviewed short and long-term company and department goals with an intention to energize key staff, thereby energizing key staff.

All leaders can develop the capacity to get to the root. By doing so, this leader is building a culture on solid communication, trust and accountability.

We are in the throes of fundamental shifts in our world; technology and globalization are leading the way.  In the process, we are immersed in so much information that it can be difficult to see the forest, much less the trees.

By getting to the root of an issue instead of staying above the surface, problems really get solved, people really do heal, and transformation takes place.

If learning how to get to the roots appeals to you, consider joining our Step Up Leader community in our FREE one hour tele-class, “The #1 Tool to Stop Overwhem: From Mindset to Impact!” on April 16th at 7:30pm.