Do Less and Be More Effective: Prepare Differently 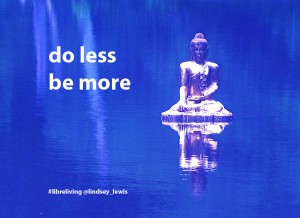 A lot is being written today about how to get, achieve and have more with less effort.  I admit to being a skeptic about much of it.  After all, aren’t we a culture that rewards effort, hard work, and persistence? I have come to appreciate that although preparation, hard work and effort are often associated with effectiveness, the leaders I work with are showing that there is something else—something equally important.

I like to call it “do less and be more.”

I am continually inspired by my clients’ successes. Each one of them has a style of preparation that is a “secret sauce.”  When we begin working together, I often observe a learning opportunity to prepare differently; for themselves and for others. Fortunately this preparation often means doing less, while getting more…

Let’s take Mike as an example.  Mike is a General Manager of a team.  Diligent, hard-working, intelligent and a thoughtful leader—Mike cares deeply about his people.  He runs the company’s flagship operations in one part of the state.  Recently he has been given new responsibilities that require travel to integrate another operation 150 miles away from the home office.  This created the need for Mike to enhance his leadership presence, especially because he is not physically with the home team as much as before.  In addition, his second in command has more responsibility and yet wasn’t fully confident in his role.

Mike’s instinct was to continue to handle problems himself directly, even though he had a larger scope of responsibility and was working more remotely than before.  When a recent problem arose for his second in command, he became concerned.  “I can’t get back there and fix it today” he told me.  Instead I asked him to practice listening deeply to his colleague even going so far as to have the colleague “practice” the difficult conversation he needed to have with the customer with Mike himself on the phone.  Mike knew what to listen for as we had been practicing intensive listening in his coaching sessions.

Do Less and Be More

Mike reported that the colleague had success in preserving the customer relationship and all this was done in his absence!

Where before Mike would have taken over himself, he modeled and coached the colleague to be effective without him.    This is a successful leadership moment for them both; one where Mike did less himself.  He prepared differently and was more effective too.

Stay tuned next week for another story of how doing less resulted in more.

We invite your comments and stories here to share with the Step Up Leader community.