The Value of “Un-Labelling” to Leadership 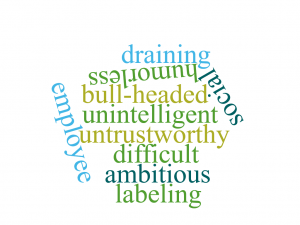 This week’s post borrows from “TED Works: The Empowerment Dynamic.” As a lifelong learner, I discovered the TED work through a class I took for coaches.   It struck a chord and I’ve been helping clients gain helpful perspective from this relevant model ever since.
Written just “two days after the very dramatic and chaotic US Presidential election,” I share their perspective here.

“Much has been said already about what will change. Most of us fear change, including big change that this election will create for just about everyone. During this time of chaos, we prefer to become like “sociologists,” observing what is emerging. Now, more than ever, we are committed to sharing ideas about how to work together in the midst of such chaos and uncertainty.

One observation that deeply concerns us is how we human beings label others and situations AND how we can let go and un-label what we have labeled. The practice of labeling is an important primitive function of the human mind. We are built to label so that our minds can keep track of things without spending a lot of energy. If you didn’t sort “this from that,” there would be more uncertainty and fear—and your brain doesn’t like uncertainty.

It’s a lot of work and sometimes scary to look at each person and situation without pre-conceived judgments. If we are not vigilant, everyday labeling becomes a normal process to put people and situations into a box. Without thinking, our labeling thoughts may sound like:

Labeling is a big part of the  Dreaded Drama Triangle (DDT)™ roles of Victim, Persecutor and Rescuer because all three roles are fear-based. To control the fear, labeling is a way to categorize so you can have a greater chance of predicting what’s going to happen, or establish blame about what did happen.

A colleague who is familiar with the DDT™ roles recently described feeling “victim” and powerless about a situation at work. He labeled his co-worker a Persecutor and the cause for why he was feeling powerless. The labeling “justified” his mentally checking-out and avoiding his co-worker.

That game worked for a while, but gradually he admitted to himself that labeling and categorizing his co-worker as a Persecutor wasn’t helping. The work environment was getting worse rather than better.

It was the intensity of the poor work environment, like the polarizing politics experienced during the US presidential elections, that helped him decide that he wanted something better. He took steps to un-label those he had labeled as “the problem.”

Here’s a summary of the process he went through, he:

Labeling is a defense mechanism that often fuels the DDT™. By un-labelling and seeing others as a Creator in their own right – whether you agree with them or not – can heal relationships and open-up the possibility of collaboration and co-creating.”