Do You Talk Out Loud Enough?

As a leader, do you talk out loud enough?

Typically leaders are believed to process information and search for answers quietly in a guise of control. After several client sessions last week, I became curious as to whether that habit is the best case scenario.

When asking them for one or two valuable take-aways from a session, I heard: “the chance to talk out loud about what I think and feel.”  In our fast-paced, 24/7 global world, I think we often underestimate the value of talking out loud and being heard by someone we trust.

I began exploring a bit more about why this might be so. Tanner Christensen, author of “The Creativity Challenge: Design, Experiment, Test, Innovate, Build, Create, Inspire, and Unleash Your Genius” researched that “talking out loud” activated creative thinking. Christensen writes:

“In neuroscience, a thought is little more than activated portions of the brain, each firing to create an image or other sensation, in a way that creates a vivid “picture” of something in our minds. To quote my personal favorite neuroscientist Paul King: “In current models of thinking, a ‘thought’ could be viewed as a chaotic attractor of neural activity in the brain – a semi-stable transitional state that is sufficiently organized to have some associational structure.” That is to say: a thought is nothing more than a series of activity in the brain that is structured enough to feel like something solid, something we can imagine and hold onto mentally.”

It turns out that in order to make a thought something more tangible—something that can be worked with, there is great value in talking out loud. It’s evidently associated with creative thinking.

Christensen states: that “By doodling ideas, speaking them out loud or recording yourself talking about them, writing them down, or otherwise getting ideas “out of your head” you are forcing the concepts that form what we think of as “an idea” into something that is more easily evaluated, modified, poked and prodded. 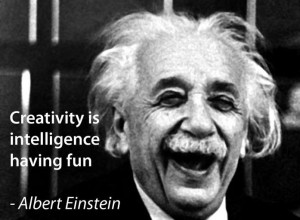 Is it any wonder why so many creative greats – the Einsteins, Edisons, Curie, and Poes – doodled, journaled, or spoke to themselves?”

How do you maximize the ideas that you generate?   Is it doodling, journaling, talking out loud? If you aren’t doing this already, pick one and try it out this week.

Looking for even more? Become a leader whose talking out loud leads to powerful results. Click here to explore.